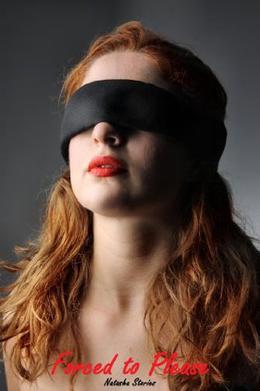 Part 4 of the ‘Forced to Comply’ series!
Hi guys and girls! This is the final installment of the cop sex stories I’ve been writing. I hope you enjoy it!

Standing before me was the man who had been in my mind constantly since the first moment I met him. Even though he was dressed in civilian clothes, a pair of dark jeans and a tight fitting shirt, and carrying a small black backpack, he still looked every inch an officer of the law. Tall, dark-haired, and powerfully built, he was exactly the sort of man that made women weak at the knees . . . and he was having that effect on me now.

A few moments before I had known exactly what I was going to say, but words seemed to completely escape me now. I just stood there staring at him.

“Hello Lauren,” he said, after he had decided that the silence had gone on long
enough.

“Oh, hi,” I said, struggling in vain to regain my self-control.

He walked in and closed the door, before pulling a small black sleeping mask from his pocket and showing it to me.

“Do you know what this is?” he asked.

I gave up my feeble attempt to play it cool. I was his. He knew it, and I knew it. There was no point pretending.

“It’s a blindfold,” I replied docilely.

He smiled at me, that same entrancing smile that I was so helpless against.

“That’s right. Do you remember what I said I was going to do to you when I came to visit?”

“That’s right Lauren. What else did I say I was going to do to you?”
I remembered very clearly what he had said.

“Correct again Lauren. You’re a very clever girl. But that’s not all I said is it? What else did I say I was going to do to you Lauren?” he asked calmly.

“You said . . . that you were going to fuck me over and over again,” I replied, feeling hot and flushed just at the thought of it.

“That’s right beautiful girl. That’s exactly what I’m going to do to you.” He looked around for a moment, “Where is your bedroom Lovely?”

If you are into tied up stories, you should scroll up and get 'Forced to Please' today!
more
Amazon Other stores
Bookmark  Rate:

'Forced to Please (Forced to Comply Cop Sex Stories)' is tagged as: