Episode Three (Look Back in Anger, #3) 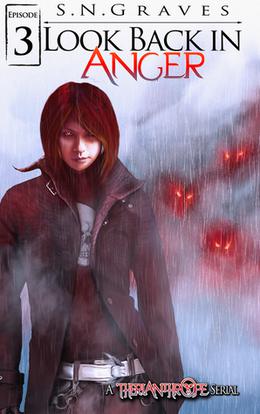 Samantha has had about all she can stand of her psycho stepbrother’s idea of wooing, and when an unexpected ally arrives on Arles’s doorstep, she may have finally found her escape plan.

Alex has been desperate to be part of the team, but now that he has to get his hands dirty, he’s finding teamwork isn’t all it’s cracked up to be.

Look Back in Anger Series Synopsis

Sam can't remember much of being a child, but the scraps of memory she clings to all hold the same terror--Arles Colfter. Now he's blackmailing her, threatening her elderly father, and forcing her to face a past long buried. Plus she's pretty sure he's a baby-eating werewolf.

In this urban fantasy novel, all SynthPet technician Samantha wants is to live quietly with her herd of cats and one-eared dog, but when Arles kidnaps her, she’s forced to unravel a thorny tangle of truth and lies, or risk being dragged down the rabbit hole into Arles's world of intrigue, gun-toting vigilantes, and...zombies.

If you have not read Episode One and Two, you are strongly encouraged to do so before beginning Episode Three.
more
Amazon Other stores
Bookmark  Rate:

'Episode Three' is tagged as:

The 'Look Back in Anger,' series