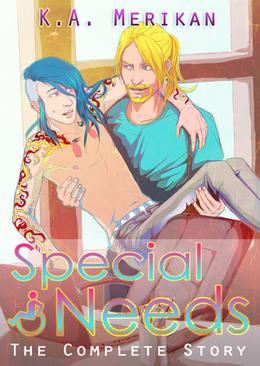 Liam slept with his boss. Again. And lost his job because of it. Again. Set on changing his ways and tired of sleeping in his car, he applies for a job as a live-in caretaker, even though he has no experience in it whatsoever. He has a lot of practice in lying his way out of any situation though. Only problem is, his new boss – wheelchair bound owner of a sex hotel – is gay, cute, funny and oh, so fuckable! There is only one logical solution to Liam’s dilemma – pretending he’s straight. Brilliant!

When Ryan inherited his aunt’s B&B, he thought he’d hit the jackpot by changing it into a fetish sex hotel. Things didn’t go as planned though, all of his marketing efforts seem to fail, and the debt is mounting up. Being a wheelchair user doesn’t help in actively promoting his hotel, but his luck starts to change when he hires a new aide. Liam is open-minded, helpful and caring. All that Ryan needs from a caretaker to kickstart his business, but things would all be a lot simpler if he didn’t start crushing on his new employee. And even if, in some other dimension, Liam did return his feelings, how long can Ryan keep his fetish a secret?

The web of lies they weave around each other is more bondage than any of them enjoy.

Contains book one and two of 'Special Needs'.

'Special Needs: The Complete Story' is tagged as:

Buy 'Special Needs: The Complete Story' from the following stores: