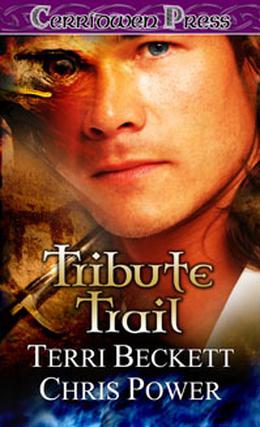 Trained all his life to serve the will of the Great Goddess, Kherin is her Chosen, her warrior, mage and priest. Betrayed by one he trusted, given as a slave to a barbarian lord, when he learns his goddess's purpose, he finds it hard to obey.

Rythian, having challenged for the leadership of his tribe and won, is forced to put the future of his people before his beloved wife and family. He refuses to let his sacrifice be for nothing. With enemies on the borders of his land threatening invasion and enemies within the tribe working against him, Rythian fights his god's intent every step of the way.

Aided by family and friends, two very different men must learn trust and friendship to combat their enemies and become weapons for their gods to wield.

'Tribute Trail' is tagged as: