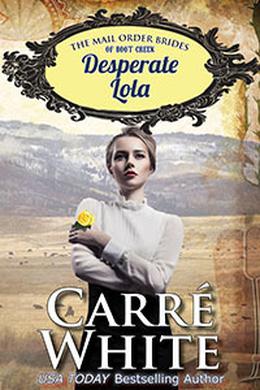 Book Two of The Mail Order Brides of Boot Creek

Hoping to escape an intolerable situation at home, Lola Foster agrees to marry a rich cattle baron from the New Mexico Territory. Her soon-to-be husband is far older, having already been married, although his wife died from illness.

Jack Kelly is set in his ways—used to having the world at his feet. He is also a man who will not tolerate lies and dishonest, fickle women. He tests his fiancé before they meet, disabling her train and sending one of his ranch hands to seduce her. When Lola discovers this, their first meeting is anything but pleasant. Sparks fly and personalities clash, although, through the storm, a glimmer of attraction flares … growing stronger by the day.

Lola’s family is determined to find her, as she is kidnapped and forced to return to Virginia. Although broken-hearted and desperate, she clings to the hope that Jack will come to the rescue, or did he wash his hands of her, realizing their union has been a mistake?
more
Amazon Other stores
Bookmark  Rate:

'Desperate Lola' is tagged as:

The 'The Mail Order Brides of Boot Creek' series

All books by Carré White  ❯