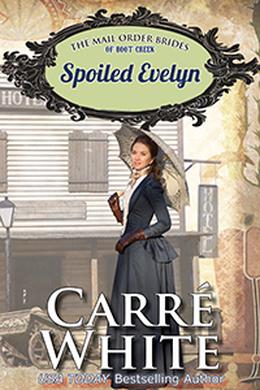 Book Four of The Mail Order Brides of Boot Creek

A woman of means, Evelyn Warner refuses to marry the man her family insists upon, fleeing with her maid, Tory, to the New Mexico Territory. Believing she has successfully escaped, hiding under the guise of a mail order bride, Evelyn is hesitant to marry Percy Vanguard, although he is from a respectable family and kindhearted.

A chance encounter with Boot Creek’s most notorious bachelor, Chuck Brittle, in a stairwell, stuns Evelyn, especially when he takes her in his arms and kisses her. The comely runaway finds herself unable to resist the charming cowboy, but, when a stranger arrives in town, shadowing her every move, she must hire him to protect her.

On the run again, in a mad dash to a hacienda near Albuquerque, romance blossoms between Chuck and Evelyn, because their attraction will not be denied. All may be lost, though, for the past is determined to intrude in the form of a vengeful fiancé and a posse of lawmen, not to mention Percy Vanguard, who fully expects to make Evelyn his wife.
more
Amazon Other stores
Bookmark  Rate:

'Spoiled Evelyn' is tagged as:

The 'The Mail Order Brides of Boot Creek' series

All books by Carré White  ❯