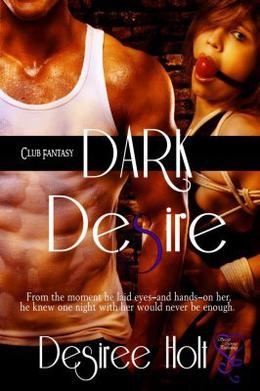 Risa Channing found herself stuck at one level in BDSM play and was ready for more. She asked Ruelas, the mysterious owners of Club Fantasy, to pair her with a Dom who would take her to the next level and beyond, but she got more than she expected with Master J. The last thing Jax Schroyer expected was a woman who pushed all his buttons the way Risa did. From the moment he laid eyes on her—and hands—on her he knew one night with her would never be enough. Somehow in the few hours they’d be together he had to convince her he was the man who would always fulfill her dark desire.

'Dark Desire' is tagged as: