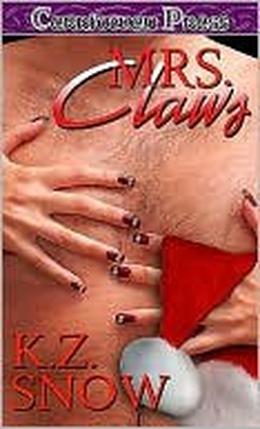 Mrs. Claws K.Z. Snow "Note: This book follows "Two Out of Three Ain't Bad" but can be read independently." "Crap, Christmas is coming." That's Lauren's attitude. Why? Because her husband left her for a twit. And because she's dated seventeen losers since her divorce. That's why. "The most wonderful time of the year" doesn't seem wonderful to her and she's not in mistletoe mood. But she "wants" to be-well, at the urging of her therapist anyway. So Lauren applies for a job playing Mrs. Santa Claus. "That" might get her in the holiday spirit. Unless, of course, the job turns out to be a bigger bite than she can chew, and a major reason for its unchewability is that one of those seventeen losers happens to be playing Santa opposite her-at a huge shopping mall, no less. Only perhaps he isn't such a loser. Then there are those inevitable encounters with difficult children and parents, the interference of meddlesome friends and the appearance of an icky ex or two. Quite a lot to handle for a diehard Grinchette. But she might just find love in the grueling process.
more
Amazon Other stores
Bookmark  Rate: