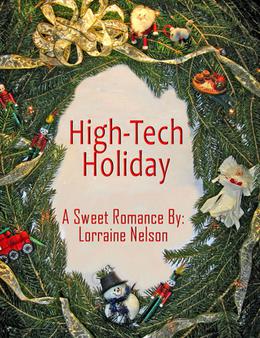 Kris Temple is a web graphics designer, an ambitious entrepreneur striving to survive in a dog-eat-dog world. She also wants to win her family’s Christmas contest. She adorns herself in full holiday gear the night before thanksgiving and is flying home fully decorated. She's thrilled to find herself seated next to a handsome man. But Kris has a speech problem. However would she converse with this man without stuttering and embarrassing herself?
Aaron Masters is not thrilled to be flying economy, but his personal jet is in for repairs. He’d had to scurry to the reservation desk at the last minute to book a seat on the only flight out, and now he finds his practical, no-nonsense demeanor assaulted by a woman dressed as a holiday advertisement…his seatmate. How could he hope to ignore this woman for the entire flight?
With their flight being rerouted, calls from her ex-fiancé/co-worker pleading for assistance, and his ex-girlfriend stalking him, they are certainly in for a memorable flight.
more
Amazon Other stores
Bookmark  Rate:

'High-Tech Holiday' is tagged as: