Destined to Love (A New Beginning #3) 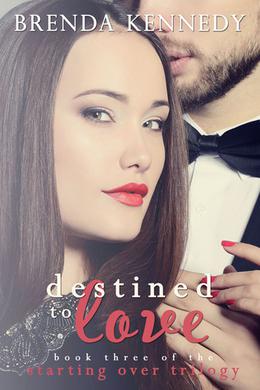 Angel Perez had a second chance at a new beginning. After the death of her Aunt Rosie, Angel followed the instructions of her aunt and packed up only a few of her belongings and headed to Florida. After moving into her Aunt Rosie’s small cottage on Siesta Key Beach, she was quickly adjusting to her new life.

After finding a job at an insurance company, Angel became friends with the two owners, Sara Roberts and Brea Kinsley. Sara and Brea made it their mission to fix Angel up on a blind date with their very handsome and single friend Mason Myles.

Afraid that her past would catch up with her, Angel lived a very private life. When she met the tall, dark, and handsome Dr. Mason Myles, she knew she wouldn’t be able to resist him. He swept her off her feet with his sexy, dimpled smile and charm.

Living on the run from a very abusive boyfriend, Jim Davis, Angel lived in fear that Jim would somehow find her. After she revealed her abusive past and fears to Mason, Mason vowed to protect her.

When Angel had heard that Jim had been fired from his job as an L.A. Police Detective, she feared he would come and find her.
Angel started noticing noises outside her bedroom window and lights in her house would mysteriously turn on and off. She started getting hang-up calls at work and would often see a dark SUV parked along her cul-de-sac road and around her job. Angel realized her worst fears had come true when she heard that Jim hadn’t been seen in two months. She knew he had found her and it was only a matter of time before he made his presence known.

While driving to the store to get items to cook Mason a home-cooked meal, Angel was the victim of a hit-and-run accident on Midnight Pass Road and sustained life-threatening injuries.
Mason’s father, Bruce, and Angel’s Uncle Raùl hired their own detectives to try to find Jim before he had a chance to strike again.

Unable to Save Angel, from yet, another attack from Jim, Mason walks in Angel during a violent attack from Jim. Mason shoots and kills Jim and a point blank range in order to save Angel

Trying to build their life together with the aftermath of the attack, they are faced with a live changing event. Can Mason move past this and have his happy ending with Angel or will it be over before it has a chance to begin?
more
Amazon Other stores
Bookmark  Rate:

'Destined to Love' is tagged as:

The 'A New Beginning' series

Similar books to 'Destined to Love'

All books by Brenda Kennedy  ❯

Buy 'Destined to Love' from the following stores: