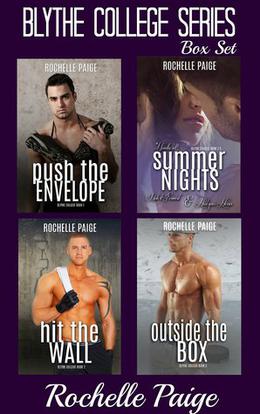 Looking for an alpha male in your new adult romance read?

On sale now for a limited time to celebrate the upcoming release of Sucked Into Love on September 24.

"I love alpha males.... Yes I know Alpha males are the in thing but they need to be done right and in this book Drake is perfect." -Aurora Rose Reynolds, New York Times bestselling author of the Until Series

"Absolutely loved! I'm a sucker for the over the top, crazy in love alphas. You give me one of those and I'm sold." -Harper Sloan, USA Today bestselling author of the Corps Security Series

Push the Envelope
Alexa is just your average college junior, attending classes and piloting Mile High Club charter flights. Boys haven't been on her radar for a couple years after a disastrous breakup with her high school sweetheart. Her plans to focus on school hit a bit of a snag when she meets bad-boy Drake Bennett and he sets his sights on making her his own.

Drake transferred to Blythe College for the rugby team, not for a new assortment of college girls. He's sexy and cocky, and he attracts women like moths to a flame. When he meets Alexa, Drake knows he's met his match. She tries to resist him, but Drake isn't used to taking no for an answer.

Hit the Wall
Jackson thought he knew what love was and feels like he missed his chance at happiness. He realizes he wasted his chance by chasing after one-night stands instead of going after what he really wanted.

Kaylie knows what loss feels like and doesn't want to take a chance on love. She puts up walls to keep her heart protected from experiencing that kind of pain again.

What happens when a guy who refuses to lose out again meets a girl who resists him as much as she can? Will Jackson be able to hit the wall Kaylie has put up and knock it down?

Push It Forward
Drake and Alexa had a whirlwind romance in Push the Envelope, falling for each other hard and fast. But their newfound love is tested during summer break when their plans mean time spent apart. When danger comes knocking on Alexa’s door with the return of her ex-boyfriend to town, Drake drops everything to be by her side.

Can Drake convince Alexa that it’s time to push their relationship forward? Or will she allow her fears to hold her back?

Hold Your Horses
Charlotte thought she was doing the right thing when she decided to go away to college. When graduation comes and she needs to decide if it’s time to go back home and settle down, she worries that she’s not ready yet. Shane has waited four long years for Charlotte, after agreeing to a long-distance relationship because it was the only way to keep her in his life. He can hardly wait for her to come home so they can finally start their life together.

What happens when the girl who is nervous about settling down to small-town life comes home to the guy who is ready to pop the question?

Outside the Box
Aubrey earned her love ‘em and leave ‘em reputation with her serial dating past. A pregnancy scare makes her see the light and change her ways. She gets serious about school and stops dating – until she meets Luka and falls head over heels for him.

Luka doesn’t trust easily after having his heart crushed by the girl next door. When he meets Aubrey, he doesn’t think she’s relationship material because of her past – even though he’s drawn to her.

What happens when the girl who always ran the moment a relationship got serious meets The One? Will Aubrey be able to get Luka to see her Outside the Box he’s put her in?
more
Amazon Other stores
Bookmark  Rate:

All books by Rochelle Paige  ❯