The Given Day (Coughlin #1) 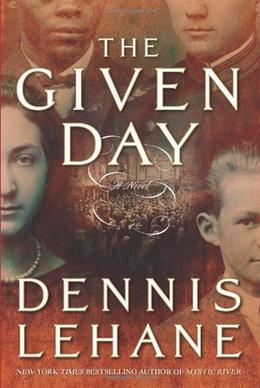 Set in Boston at the end of the First World War, New York Times best-selling author Dennis Lehane's long-awaited eighth novel unflinchingly captures the political and social unrest of a nation caught at the crossroads between past and future.

The Given Day tells the story of two families—one black, one white—swept up in a maelstrom of revolutionaries and anarchists, immigrants and ward bosses, Brahmins and ordinary citizens, all engaged in a battle for survival and power.

Beat cop Danny Coughlin, the son of one of the city's most beloved and powerful police captains, joins a burgeoning union movement and the hunt for violent radicals.

Luther Laurence, on the run after a deadly confrontation with a crime boss in Tulsa, works for the Coughlin family and tries desperately to find his way home to his pregnant wife.

Coursing through some of the pivotal events of the time—including the Spanish Influenza pandemic—and culminating in the Boston Police Strike of 1919, The Given Day explores the crippling violence and irrepressible exuberance of a country at war with, and in the thrall of, itself. As Danny, Luther, and those around them struggle to define themselves in increasingly turbulent times, they gradually find family in one another and, together, ride a rising storm of hardship, deprivation, and hope that will change all their lives.
more
Amazon Other stores
Bookmark  Rate:

'The Given Day' is tagged as:

Similar books to 'The Given Day'

All books by Dennis Lehane  ❯

Buy 'The Given Day' from the following stores: