The MacKinnon's Bride (The Highland Brides #1) 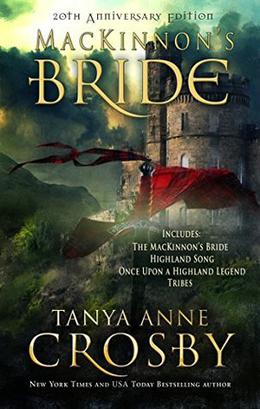 When Iain MacKinnon's young son is captured by the English, the fierce Scottish chieftain vows to stop at nothing to secure the boy's return. Retaliating in kind, he captures the daughter of his enemy, planning to bargain with the devil.

FitzSimon's daughter has lived her entire life in the shadows of the man she called father--yet never would she have imagined he would deny his only daughter. Even as Page blames her captor for welching on a deal with her father, she suspects the truth... but the shadows hold secrets. Now only the love of her reluctant champion can save the MacKinnon's Bride.

HIGHLAND SONG
Gavin Mac Brodie fears the thought of becoming the man his father was. Driven into solitude by visions of what he would not be and could not have, he vows never to wed. But Gavin's is about to encounter a wee bit of Highland magic...

Catrìona is no stranger to solitude. Driven deep into the Highland mountains, her people have become little more than legend. But no one knows better than Catrìona that you cannot hide from fate. Naked and painted in the woad of her ancestors, she appears to Gavin Mac Brodie ...

But is she flesh and blood--a chance for a future--or just a faerie creature who will vanish if Gavin dares to open his heart?

ONCE UPON A HIGHLAND LEGEND
In the year 2014 Annie Ross has gone through her entire life a bit lost. She's about to find herself misplaced in time as well--all the way back to 878 A.D.--where she must take her place as a guardian of the Destiny Stone, and then find a way to restore the faith of a powerful Highland chieftain. Will she win Callum's heart as well?

THE TRIBES, A Reader's Companion to the Highland Worlds of Tanya Anne Crosby
* Character profiles for the leading characters of seven books, delineating how they are connected
* Family trees
* Select artwork, digitally signed
* Inside scoop from the author as relates to the creation of her novels
* Hints at future novels, plus a chance to give the author feedback
* Asides from the author about various historical elements included in her stories
* Extensive Glossary, including Gaelic and medieval words and phrases used in the novels
* Complete Series Bibliography
more
Amazon Other stores
Bookmark  Rate:

'The MacKinnon's Bride' is tagged as:

The 'The Highland Brides' series

Similar books to 'The MacKinnon's Bride'

Buy 'The MacKinnon's Bride' from the following stores: