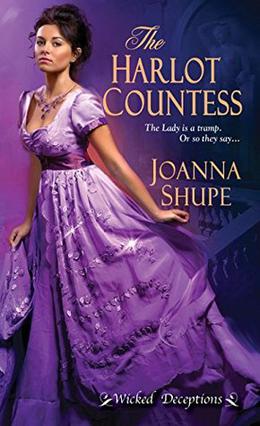 Maggie, Lady Hawkins, had a debut she’d rather forget—along with her first marriage. Today, the political cartoonist is a new woman. A thoroughly modern woman. So much so that her clamoring public believes she’s a man…

FACT: Drawing under a male pseudonym, Maggie is known as Lemarc. Her (his!) favorite object of ridicule: Simon Barrett, Earl of Winchester. He’s a rising star in Parliament—and a former confidant and love interest of Maggie’s who believed a rumor that vexes her to this day.

FICTION: Maggie is the Half-Irish Harlot who seduced her best friend’s husband on the eve of their wedding. She is to be feared and loathed, as she will lift her skirts for anything in breeches.

Still crushed by Simon’s betrayal, Maggie has no intention of letting the ton crush her as well. In fact, Lemarc’s cartoons have made Simon a laughingstock…but now it appears that Maggie may have been wrong about what happened years ago, and that Simon has been secretly yearning for her since…forever. Could it be that the heart is mightier than the pen and the sword after all?
more
Bookmark Rate Book
Amazon Other stores

Similar books to 'The Harlot Countess'

All books by Joanna Shupe  ❯

Buy 'The Harlot Countess' from the following stores: