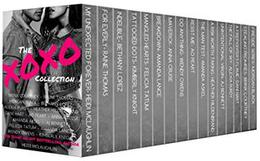 99 CENTS FOR A LIMITED TIME!
16 New Adult Stories from 16 of your favorite New Adult Authors
Find your next book boyfriend here.

Featuring MY UNEXPECTED FOREVER by USA and NYT Bestselling Author Heidi McLaughlin
They say you should expect the unexpected, I didn't realize my unexpected would be the forever kind.

FOR EVERLY by Raine Thomas
The last thing physical therapy student Everly Wallace wants is a relationship, but when she’s roped into working with sexy Major League pitcher Cole Parker, she’ll discover that it just might be the one thing she needs.

INDELIBLE by Bethany Lopez
Sam's a single mom, working her way through college while raising her toddler. Judd's a college baseball player, who on the outside, looks like he doesn't have a care in the world. Can two people at different stages in their life find a way to make a life together?

TATTOOED DOTS by Kimberly Knight
Brooke and Easton learn that people are brought into their lives for many reasons. Over time, they find out what those reasons are. Some are to be a temporary acquaintance while others are there for life.

MANGLED HEARTS by Felicia Tatum
Can two loves find their way back to each other despite an addiction and a hardened heart, allowing their love to overcome it all? Can these mangled hearts be mended?

BREAKDOWN by Amanda Lance
After Charlotte Ferro's suicide attempt is ruined by a handsome do-gooder he introduces her to a world of fast cars and cool criminals. But can their newfound friendship survive the secrets of their past?

MAVERICK by Anna Cruise
International surf sensation Kellen Handler has it all – fame and fortune and more women than he can count – but he's riding his own personal wave toward disaster. Can PR genius Gina Bellori rescue his reputation...and his heart?

DO ANYTHING by Wendy Owens
A broken heart is only the beginning for her. He thinks he has his life figured out. Will they risk their hearts on a new chance at love?

RESIST ME by A.O. Peart
Ethan, a former-Marine-turned-firefighter, has never really cared for any woman, while living his life to the fullest and enjoying the bad boy stigma. Until the street-smart Lisbeth comes along, and instantly turns Ethan’s world upside down, making him want to protect her, no matter the consequences.

The Man Test by Amanda Aksel
Couple therapist Marin Johns tries to prove that all men are liars and cheaters by beginning a fictitious relationship. Will her new "boyfriend" be the statistic or will Marin regret the satisfaction of being right?

A RISK WORTH TAKING by Heather Hildenbrand
For college grad, Summer Stafford, watching her parents’ divorce has taught her that, above all, love is a risk. For a drifter like Ford O’Neal, love isn’t just a risk, it isn’t even on the table. But attraction quickly leads to something more and they are both forced to realize they’re risking a whole lot for a summer fling.

UNINTENTIONAL VIRGIN by A.J. Bennett
Nineteen-year-old Karma points is cursed. Cursed with a ridiculous name, self-esteem issues and the inability to lose her virginity. That is until Jax, the tattooed bouncer, comes into the picture.

THE FALL OF SKY (PART ONE) by Alexia Purdy
Singing duo Audrey and Liv Westing hope to be discovered as the next big thing. While fumbling through their turbulent existences, they attract the eye of a deadly but powerful Cartel family.
more
Amazon Other stores
Bookmark  Rate: