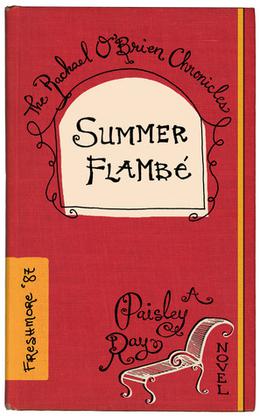 It’s 87’, the era of Pop Rocks, Jelly shoes and big hair bands. Rachael O'Brien continues to chronicle her summer and her freshmore plan seems simple: Veg-out and avoid Dad’s girlfriend. As if “quality time” working in her father’s restoration shop for the summer isn’t tortuous enough, his ditzy, aerobic-instructor-girlfriend who’s age is somewhere between--too old to be her sister, but too young to be her mother, moves into their house and tries to bond. Just when things seem maxed-out-weird, Rachael's traveling psychic mom and her nut-case partner make a surprise visit, sending life into warp-speed wackadoo.

Rachael sets out to convince her estranged mother to return to her old life. But things don’t go as planned. The theft of an eccentric client’s painting unravels a guarded family secret and throws Rachael into a romantic encounter with a wanted man. The summer break ignites into a whole lot of trouble and a zany journey of personal discovery, heartache, and resiliency in PAISLEY RAY'S SUMMER FLAMBE'.
more
Amazon Other stores
Bookmark  Rate:

'Summer Flambe'' is tagged as:

The 'The Rachael O'Brien Chronicles' series

All books by Paisley Ray  ❯