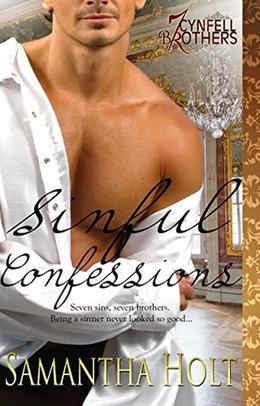 Lust, gluttony, greed, sloth, wrath, envy and pride. The Cynfell brothers are the very embodiment of a sinful existence. But could the right woman change that?

Behind the walls of Lockwood Manor, Julian Cynfell, the Marquess of Lockwood whiles away his days writing angry letters, drinking and sleeping. He never expects his solitude to be interrupted by a brazen American heiress.

An American heiress who is expecting a wedding.

Viola Thompson can't believe her luck when the English lord she has been corresponding with for the better part of a year asks her to visit him. This has to mean an offer of marriage surely? Finally, Viola will prove to her family and friends that she is more than a ruined woman with no prospects. Not to mention she knows they will be a love match. No one could write such beautiful letters without being the perfect man.

But when she arrives in cold, dreary England to be faced by a foul-tempered, grizzled--albeit in a handsome way--marquess, her dreams of marriage are quickly dashed. Can she draw the lord out of his melancholy ways? And does she even want to remain in England while rumours of three dead wives circulate around Lockwood?

One thing is for certain, this American heiress has never been one to back down from a challenge--especially when not even the Atlantic Ocean could dampen the patent desire running between them.
more
Amazon Other stores
Bookmark  Rate:

'Sinful Confessions' is tagged as:

All books by Samantha Holt  ❯