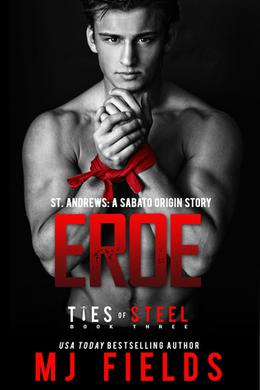 Sabato Efisto was born from an unholy union, the bastard son of a martyred saint and the Devil. At least, that's what he's believed, for most of his life.

His father is an Italian crime lord, a man so dangerous that Sabato's mother died trying to get away from him. For that tragedy, which happened on his seventh birthday, Sabato blames himself. Every year, he practices the ritual of self-punishment, flirting with death the way most boys his age flirt with girls.

Until ten years later, when he meets a sweet girl named Luciana, at St. Andrews of the Holy Cross. For the first time in his life, Sabato doesn't want to end it. The darkness in his soul is replaced by hope. But, as the priests will tell you, the sins of the father are not easily escaped.
And those who are born into darkness, must carry that cross forever....
more
Amazon Other stores
Bookmark  Rate:

'Eroe' is tagged as:

The 'Ties of Steel' series

All books by M.J. Fields  ❯

Buy 'Eroe' from the following stores: