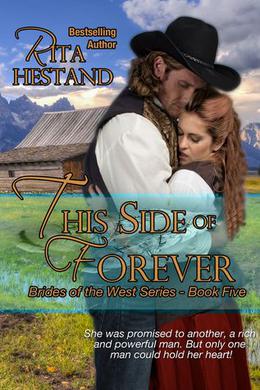 When Clay Reno returned from the war to find his fiance engaged to the man that shot him, he had to find a way to accept it and go on. For her sake.
He couldn't tell her he had nearly lost his leg and feared he'd be a cripple. He couldn't tell her that it was the reason he hadn't come back to claim her.
The only family he had left was Billy, his youngest brother. Billy wanted to keep their land and so Clay decided they would ranch it. But how was he going to stay away from Amy?


When Amy's mother was thrown out of her house, Amy moved into the hotel with her mother. But there were more sinister things happening and now Amy's life was in danger. The only man to help was Clay!


It was all up to Clay now. Martin was insane, George, Amy's betrothed beat her when she broke off the engagement. Could Clay save her from all the evil?
more
Amazon Other stores
Bookmark  Rate:

'This Side of Forever (Book Five of the Brides of the West Series)' is tagged as:

Buy 'This Side of Forever (Book Five of the Brides of the West Series)' from the following stores: