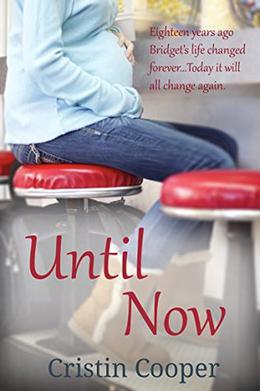 Then:
Sixteen year-old Bridget Larson was no stranger to heartbreak. When she found herself pregnant and alone with barely enough money for a hotel room for one night, the flashing neon sign of a neighborhood diner changed her fate. Hungry and cold, with just enough money for a cup of soup, Bridget discovered the love and belonging she craved in a family strangers at the fifties style cafe.

Twenty-four year-old Billy Hall struggled with his own grief. Months ago, he was wandering Europe, in search of his purpose in life, when he received a call that would leave him saddled with his family’s diner. It was a noose around his neck until a pregnant teenager stumbled in hungry and alone. Inexplicably drawn to the girl, he had no idea the purpose he travelled the world to find was simply waiting for him to come home.

Now:
After hiding their feelings for each other over the past eighteen years, Bridget and Billy's life is about to change again. The baby who brought them together is leaving for college today. They both wonder if Katie leaving will take away their last reason to stay in each others lives, or is she giving them a reason to stay together?

This novel is not intended for younger readers due to mature content.
more
Amazon Other stores
Bookmark  Rate:

'Until Now' is tagged as:

Similar books to 'Until Now'

Buy 'Until Now' from the following stores: