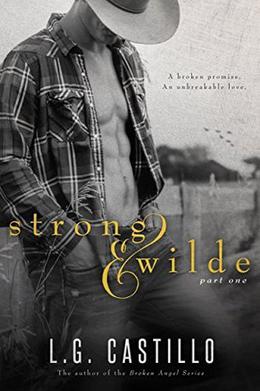 Strong & Wilde is a three-part novella serial with cliffhangers.

A broken promise. An unbreakable love.

The hardest thing Cody Wilde ever had to do was keep the promise he made to his dying father—stay away from trouble. Growing up in a rural Texas town and being bullied by the sheriff’s son made it nearly impossible to control the notorious Wilde temper. Only having his good friend, Cassie, and her family for support made the task bearable.

Cassie Strong never understood why people picked on Cody. He was sweet, sexy, and had a silly side that he showed only to her. When tragedy strikes her family, it’s Cody who is by her side and their friendship blossoms into something more.

But when Cody’s lifelong enemy threatens the one thing that could make him break his promise, will he risk losing Cassie or will he be strong enough to hold on to his father’s last wish?
more
Amazon Other stores
Bookmark  Rate:

'Strong & Wilde' is tagged as:

All books by L.G. Castillo  ❯