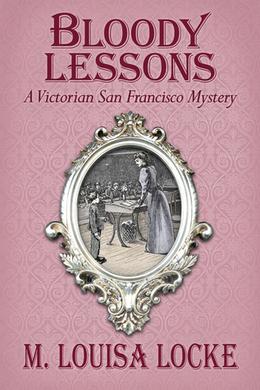 In Bloody Lessons, it's the winter of 1880, and the teachers of San Francisco are under attack: their salaries slashed and their competency and morals questioned in a series of poison pen letters.

Annie Fuller, the reluctant clairvoyant, has been called into investigate by Nate Dawson, her lawyer beau, and the case becomes personal when they discover that Laura, Nate's sister, may be one of the teachers targeted for attack.

In this installment in the Victorian San Francisco Mystery series, readers will find the same blend of a cozy mystery with romantic suspense, played out against the historical backdrop of late 19th century San Francisco, that they found in Maids of Misfortune and Uneasy Spirits.

If you are new to this series, you will still enjoy spending time with the lively residents of Annie Fuller's boarding house and visiting San Francisco when Golden Gate Park was filled with horse-drawn carriages, saloon-keepers controlled politics, and kisses were stolen under gaslight.
more
Amazon Other stores
Bookmark Rate Book