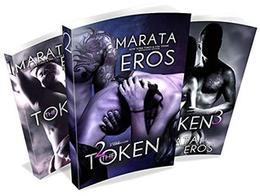 A virgin stripper, a tragic secret, a dangerous past and a reluctant billionaire....

Warning : THE TOKEN is a dark romantic suspense serial dealing with disturbing themes of violence, coercion, and the underbelly of sexual degradation. Could contain trigger elements .

TT1 :
Twenty-two year old Faren Mitchell hears the two words that change her abbreviated life forever. They're so final Faren decides she has nothing to lose by seizing every remaining moment of what life has to offer.

Until Faren collides with a motorcycle ridden by billionaire Jared McKenna.

Even the dark secret of her past and catharsis as a physical therapist can't save Faren from the sexual spiral that waits for her in the arms of a man who commits to no one. When circumstances force her to get a second job as an exotic dancer, Faren never imagines how close that choice will bring her to the brink of a new reality she is unequipped to handle.

TT2 :
Faren Mitchell keeps the secret of her second job from the one man who could see her through some of the darkest moments of her life. She doesn't want Jared "Mick" McKenna for the billions he's amassed, but for the one thing she's never given any man: her innocence.

Mick's guilt over the injury he inflicted fuels the beginnings of something more; a sexual consumption of each other that neither were anticipating. When Faren's actions don't match her words, Mick suspicions are raised. His feelings turn to ones of protection after Faren is mugged and he can't reconcile his desire for her with the reality they now find themselves in.

As Faren's bucket list grows, so does the danger that surrounds the choices she's made. Can she take what she needs from Mick and also secure her mother's life? Or will the truth she has weaved between the lies doom them both?

TT3 :
Faren collapses, narrowly escaping discovery upon hearing traumatic news delivered by Thorn. When Thorn becomes her uneasy accomplice in the deception of Mick, Faren decides she needs to come clean with the truth. Shelving her pride might be the last thing she wants to do, but as facts and actions continue to contradict one another, her hands become tied in the lies she creates to survive.

Faren only needs one last lap dance to erase the final debt that hangs over her mother's head like a cloud of doom. But when Ronnie Bunce circles closer to Faren and threatens the last sanctuary she possesses, circumstances unravel to reveal lies that run deeper than she knew.

Can Faren and Mick consummate their passion before her deceit is discovered? Or will the last dance be the ultimate loss?
more
Amazon Other stores
Bookmark  Rate:

'The Token Series: A Billionaire Dark Romantic Suspense: Box Set' is tagged as:

All books by Marata Eros  ❯