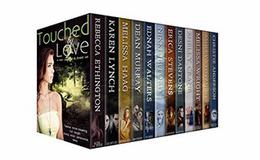 The perfect mix of romance and suspense, with a generous helping of magic, vampires, werewolves and shapeshifters!

Over 3000 pages of YA Romance and Teen Urban Fantasy to keep you breathless, sleepless and wanting more.

These books have collectively received more than 30,000 5-Star ratings & reviews.

Significance by Shelly Crane
Saving Caleb's life instantly changes Maggie's life. They are meant to be soul mates, but powerful forces are determined to keep the two of them apart.
Kiss of Fire by Rebecca Ethington
The scar on Joclyn's neck marks her as different in ways she doesn't understand. When her best friend Ryland sees it for the first time, things between them change forever and she realizes that she might lose the one thing she's always wanted.
Relentless by Karen Lynch
Sara's powerful gift forces her to live a double life as she searches for answers about her father's death. Her separate worlds collide as a sadistic vampire sets his sights on her. Can Nikolas protect her from her new enemies?
Deep Blue Secret by Christie Anderson
California teen Sadie James is saved by a mysterious boy with crystal green eyes, a boy who refuses to tell her his name. Her pursuit of the boy drags her into a world of dangerous secret agents that she never knew existed.
Broken by Dean Murray
Adri Paige's move into a new town lands her squarely in the middle of a war. Adri will be forced to choose between Brandon and Alec. One wants her dead, the other is trying to save her. Even more worrisome, neither boy is human.
Runes by Ednah Walters
Raine's attraction to Torin St. James was distracting even before he saves her life. By healing Raine, Torin changes something deep inside of her. Now Raine and her friends are in danger—she'll have to choose sides and the wrong choice will cost Raine her life.
Hope(less) by Melissa Haag
Gabby just wanted to escape to college. She didn't count on being dragged into a hidden society where fur is optional or on Clay following her back to college. Can the two of them work together to get answers to their questions?
Entangled by Nikki Jefford
Unexpected events leave teenage witch Graylee Perez stuck sharing her sister's body. Graylee will have to solve the mystery of her death in what little time she has left. The real question is whether warlock Raj McKenna will help or hinder her in those efforts.
Kindred by Erica Stevens
One of the last in a long line of vampire slayers called Hunters, Cassie chafes against the expectations of the other Hunters. Darkly handsome Devon seems like exactly the distraction she needs—if only he didn't have dangerous secrets of his own.
Deadly Crush by Ashley Stoyanoff
Jade Shaw wants nothing more than to steer clear of the local werewolf pack. Inexplicably drawn to newcomer Aidan Collins, she attempts to keep him out of the pack's grasp. Unfortunately, Aidan's ties to the pack are deeper than she can imagine and competing for his attention sucks her into a dangerous game.
Ignited by Desni Dantone
Kris Young is on the run from forces she doesn't understand. Her only hope of salvation is Nathan, the mysterious figure that has saved her life four times in the last fourteen years. Nathan will introduce her to a world where nothing is as it seems, a world where not even their hearts are safe.
more
Amazon Other stores
Bookmark  Rate:

'Touched by Love: 10 Mind-blowing Paranormal Tales' is tagged as: