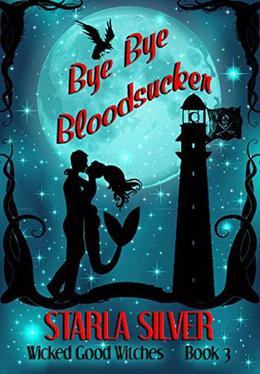 The Howard Witches along with their mentor, the vampire William Wakefield, are called in to assist the local sheriff after the beaches of The Demon Isle fall under attack, terrorizing those that live above the water, as well as those that live below.

Can the Howard’s survive a little mermaid mayhem?

Charlie finds himself at the mercy of three curvy and bewitching mermaids who've sought him out in need of his help. But are they after more than just his assistance? His wolf senses are tingling, but he can’t turn down beautiful women who need his help.

Michael Howard is planning a leisurely afternoon, followed by a sultry night with new girlfriend, Emily Morgan. But during lunch with Anthony Jordan, infamous writer of The Modern Day Guide to the Supernatural, plans go awry, and Michael finds himself diving into the ocean to save a mermaid in distress.

Not long after, Emily’s life is thrown into peril… the kind that includes a set of flippers and a race against the setting sun before the ocean calls her home. Permanently.

Meanwhile, Melinda has to have an awkward conversation with William after their unexpected intimate moment the night before. A talk that only adds to her confusion. Does he have feelings for her, or not? She has no idea. And doesn't have the guts to ask him.

This is followed by a lunch date with the molasses eyed, say-everything-she-wants-to-hear, Riley. He’s packed a picnic basket on the back of his motorcycle. However, food is not on the menu…

Melinda's web of secrets and lies begins to unravel and can lead to just one outcome: one of the men she loves is going to get hurt. She needs to fix her mistakes before it’s too late, only before she can, a heartbreaking discovery might just shatter everything.

'Bye Bye Bloodsucker' is tagged as:

All books by Starla Silver  ❯