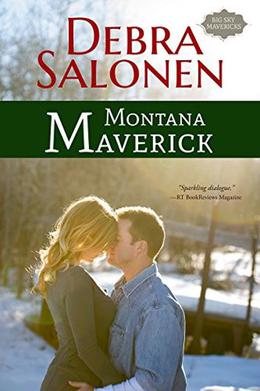 Be careful what you wish for-
Meg Zabrinski wants a child. She's a successful scientist, a well-known environmental advocate, and a tenured professor. She doesn't need a man in her life to make this happen. But having a baby alone is a weighty decision, so she retreats to her isolated mountain cabin to write and think. When Henry Firestone--an old foe from her distant past--drops out of the sky on Christmas Eve with three young children and a baby, Meg tells herself she'd be crazy not to consider all her options--especially when she's always nursed a secret crush on the handsome rancher. Although the sparks between them ignite a mutual passion, Henry makes it clear he's done having children. Falling in love with Henry Firestone and his beautiful family would require Meg to give up her dream. Can the Lone Wolf assimilate into a new pack, or was this Big Sky Maverick meant to be alone?

They say timing is everything-
Henry Firestone doesn't recognize the "angel in snowshoes" who comes to his rescue in the middle of a blizzard, immediately, but Meg Z. knows him. Twenty years earlier, the media paired them as rivals to the death. Meg championed the reintroduction of wolves to Yellowstone, while Henry argued just as passionately that wolves would put ranchers on the Endangered Species List. She's still beautiful, independent and headstrong, and Henry's now free to admit that he always had a thing for her. Unfortunately, he's fighting for sole custody of his late daughter's four children. They are his biggest priority. He'd do anything to keep his family together--even sleep with the enemy in hopes that she might join his cause.
more
Amazon Other stores
Bookmark  Rate:

'Montana Maverick' is tagged as:

All books by Debra Salonen  ❯