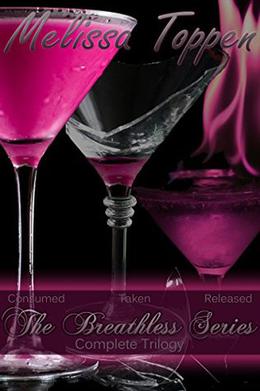 Get the entire Breathless Series- Consumed, Taken, and Released- now all together at a special low price.

Consumed
The Breathless Series Book 1
Addison Grant thought she had life all figured out. Attend college, land the job of her dreams, and marry her high school sweetheart. Everything seemed to be falling into place, or at least that’s what she thought.

Having moved from Vermont to Las Vegas with her boyfriend Grayson, the last thing Addison expected was to come home one day to find all of her belongings packed up in boxes and her eight year relationship over.

Heartbroken and lost, Addison finds herself, for the first time, unsure of what the future holds. But a chance meeting with a gorgeous bartender sets her on a path she never expected.

Liam Mason isn’t just your average bartender. There is something about him that doesn’t quite fit but Addison can't put her finger on it, nor can she deny the sparks that fly between them. As much as she tries to fight her quickly forming feelings for Liam, his constant pursuit of her makes it impossible to resist his charms.

When Addison lands a major project at work, she unknowingly sets herself up to discover that Liam is not who he says he is. When Addison learns the truth will she be able to forgive the lies or will she be forced to walk away from the one man who has consumed her entire existence?

Taken
The Breathless Series Book Two
Addison Grant had no way of knowing that a chance meeting with a sexy bartender would have the power to alter her entire existence. In one word, one touch, he consumed her. But can something this good really last forever?

Now that Addison knows the truth about Liam Mason, will she be able to forgive the betrayal or will she have the strength to walk away from the one man that she can’t live without?

Liam is determined to show Addison that he is the man she fell in love with. But she quickly learns that loving a man like Liam is not as easy as it seems. He has a past, but then again who doesn’t? But when that past collides with the future, it not only threatens everything she has built for herself, but it threatens the one thing she has fought so hard to protect; her heart.

Released
The Breathless Series Book Three
Addison Grant had no way of knowing that a chance meeting with a sexy bartender would have the power to alter her entire existence. In one word, one touch, he consumed her. But can something this good really last forever?

Liam Mason was everything Addison Grant shouldn’t want. But he was everything she needed. Sweeping her off her feet and showing her a world she had only ever dreamed of. He was her fairytale, her happily ever after, or so she thought.

But Liam is a man of many secrets and what’s worse than a man with secrets? One who refuses to share them. But secrets always have a way of coming out in the end…..

Can Addison push past the deceit and lies and see the man Liam truly is? And if she can, will Liam turn out being the man she fell in love with or the man she no longer recognizes?

When the past and future collide, how far would you go to save the only thing that you can’t live with out?