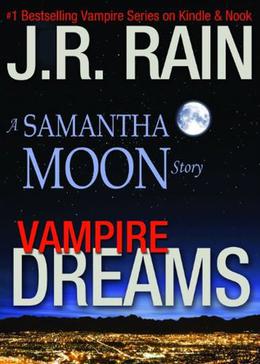 "Vampire Dreams" - In J.R. Rain's exclusive ebook short story, Samantha Moon sets out to find the answer to a mysterious, haunting dream...a dream in which sees a young woman die, over and over again. What she discovers, what she finds out about herself, will challenge everything she believes...and shed light on what she's becoming.

"Rearview Mirror" - A man. A freeway off-ramp. And, in Harvey's rearview mirror, one rapidly-approaching truck. A truck that Harvey is certain will hit him. And hard. Harvey has but a split second to make a decision to save his life. A split second to trust his gut. Now Harvey is about to make the choice of his life.

"Death Came Knocking On My Window" - A college student on a late-night studying binge is about to come face to face with his worst nightmare.

'Vampire Dreams' is tagged as:

The 'Vampire for Hire' series