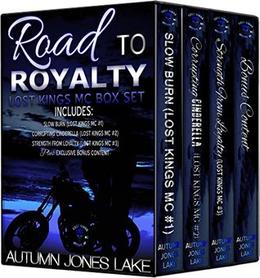 SLOW BURN (Lost Kings MC, Book #1)
Original publication date: October 14, 2014
Forced to represent an outlaw biker, a married attorney must come to terms with her feelings for her client while avoiding the danger he brings into her sedate life.
.
CORRUPTING CINDERELLA (Lost Kings MC, Book #2)
Original publication date: December 2, 2014
Although attorney Hope Kendall cares deeply for President of the Lost Kings MC, Rochlan "Rock" North, the truth is they come from completely different worlds. Add to that the fact that they are also both headstrong people, and they have a very rough road ahead of them.


STRENGTH FROM LOYALTY (Lost Kings MC, Book #3)
Original publication date: March 17, 2015
As a dark cloud descends over Hope and Rock’s already precarious future, will a long-hidden secret push them both past the point of no return?

'Road to Royalty' is tagged as:

Similar books to 'Road to Royalty'

Buy 'Road to Royalty' from the following stores: