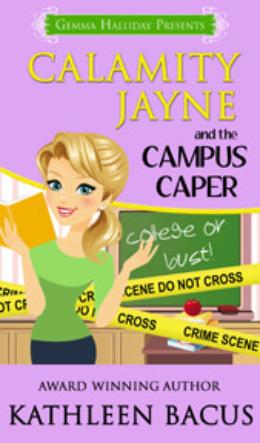 What does a blonde get on her intelligence test?
Drool.

Ace cub reporter Tressa Jayne Turner is carrying a full load--and we're not talking post-holiday pounds. Back in college for the fourth time (but who's counting!?), "Calamity Jayne" is looking to nab a raise from her stingy boss at the Gazette , Stan. So, what's to stop her from making the grade?

Well, for starters her grandmother turned roommate rekindling an old flame, maid of honor madness run amok, a botched betrothal that's more than just schoolyard gossip, and a campus criminal who is out to teach the student body a lesson... one crime at a time. As Tressa navigates the halls of higher education, she finds herself torn not only between homework and investigating, but also between a man who likes her for herself and another man who wants to save her from herself.

It's a case of murder and mayhem by the books...and failure is so not an option.

( NOTE : This book was previously published under the title Calamity Jayne Goes to College .)
more
Amazon Other stores
Bookmark  Rate:

'Calamity Jayne and the Campus Caper' is tagged as:

Similar books to 'Calamity Jayne and the Campus Caper'

More books like 'Calamity Jayne and the Campus Caper'   ❯

All books by Kathleen Bacus  ❯

Buy 'Calamity Jayne and the Campus Caper' from the following stores: