Tempted by Fire (Dragons of Bloodfire #1) 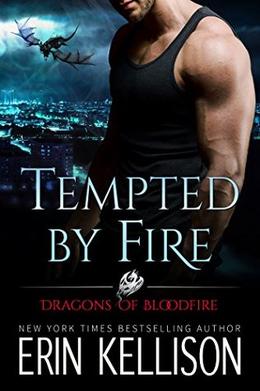 Tempted By Fire is the first in the enthralling new Dragons of Bloodfire series by New York Times bestselling author Erin Kellison.

Dragon shifter Thane Ealdian has waited six hundred years to avenge the loss of his family, and finally a clue has surfaced that implicates an old adversary. Thane will stop at nothing to seek his revenge, but to prevent violence between the clans, the Bloodkin Triad has forced a mediator on him. Some upstart named Emerson Clark…

Emerson is fed up with all Bloodkin and how they’ve managed to control every aspect of her life. While she doesn’t believe that Bloodkin can shift into dragons—because, really?—she has to admit, they are exceptionally nice to look at. But once the mediation is over, she wants nothing to do with them ever again.

When Thane discovers that the clever and beautiful Emerson is the key to uncovering the truth, he has no intention of letting her go. Although she wants to run, she can’t turn her back on Thane or her intense feelings for him. His quest pulls at her heart, just as his nearness sparks something dangerous inside her. With evil in hot pursuit, sooner or later everything will ignite—the mediation, the shifter within her… and their passions.

'Tempted by Fire' is tagged as:

The 'Dragons of Bloodfire' series

Similar books to 'Tempted by Fire'

Buy 'Tempted by Fire' from the following stores: