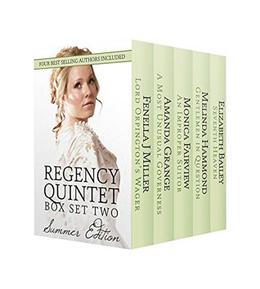 Persuaded by her mother to act as chaperone to her godmother's daughter, young widow Patience Sinclair doesn't realise quite what is involved. Lady Orpington is perfectly capable of arranging her daughter's come out, so why is Patience needed? When she meets Lord Simon Orpington it all becomes perfectly clear. Their respective mothers intend them to make a match of it. And while Patience has no intention of marrying again, it seems that Simon has other ideas.


A Most Unusual Governess
Amanda Grange

When poverty forces Sarah Davenport to take up a position as a governess, she finds herself in conflict with the arrogant but devastatingly handsome Lord Randall. When danger threatens, he is the only one she can trust.

A lady in possession of an independent fortune has no need for a husband. Miss Julia Swifton, secure in that belief, has made no attempt to search for one, even after three seasons in London. That is until her grandmother, an advocate of women's rights, rises from her deathbed and threatened, of all things, to marry her to a notorious rake, Lord Thorwynn.Shocked into action, Julia launches into a search for an intelligent, scholarly husband who will suit her. On her way she has to rescue a fallen 'angel,' save a rake from being forced into marriage, defeat an unscrupulous gamesmaster who needs to seduce her for money, and avert a friend's disastrous runaway marriage.Fortunately, she does not have to do it alone. Even if her companion, Lord Thorwynn, is the last person she would ever want to marry.

Gentlemen in Question
By Melinda Hammond

A tale of romance, adventure and intrigue in Georgian England by an award-winning author.
In the closing months of 1792, the terror of the French Revolution forces Camille, the young Comte du Vivière, to flee his homeland and seek refuge with his relatives in England. For Madeleine, the arrival of her handsome French cousin marks a change in her so far uneventful existence and brings her into contact with the enigmatic Beau Hauxwell. Soon she finds herself caught up in a dangerous web of intrigue involving both gentlemen, but which one is the villain?

Septimus Berowne, poet, does not expect to succumb to the charms of wealthy Lady Louisa Shittlehope, although his brothers are eager to court her. Hampered by the shocking Berowne reputation, Septimus struggles to stop Louisa embroiling herself in his family’s affairs and keep her safe from his dissolute brother Quintus.
But the tribulations of the Berowne girls capture Louisa’s warm heart and she cannot help but interfere. Quintus strikes, involving Louisa and the Berownes in a madcap chase to rescue her love-struck ward. Will they be in time? Can Louisa brave Society’s disapproval to snatch at the promise of happiness?