Strong-willed Bride for Her Lonely Farmer 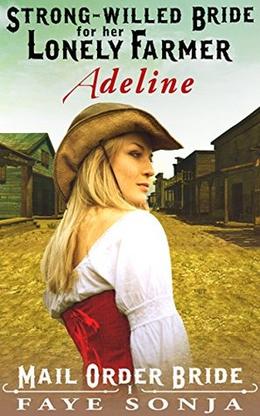 It's 1870, California, and in this series love flourishes in the simple town of Goldrush when three fraught sisters flee New York, desperate to start new lives.

What will happen in a marriage when two hearts committed to a strict-no-love policy?
Could Adeline like this ever grow to love a man like James?
Join strong-willed Adeline Archer as she conquers frontier life and the frozen heart of farmer James Blair.

Tall and graceful Adeline Archer is twenty-five and she is DESPERATE!
She needs to run from the luxury she's known in New York.
It's either her or one of her younger sisters commanded to marry the awful man who makes her skin crawl. Their grand New York house is to be sold and their affluent lifestyle is at an abrupt end now her father has taken his own life and left Adeline as payment for his gambling debts to the man she hated most!

Resourceful Adeline has six months to get them far away from the clutches of Lex Baxter, so she answers a MOB advertisement with a strict no-love policy. Perfect! She has plans for her mother and sisters to follow later.

Travel with her to the town of Goldrush, in rural California, and meet the robust and handsome James Blair who has a frozen heart, heart-breaking secrets, and is on the verge of being forced off his land.

God has a plan for Adeline and James, but it's almost over before it starts with these two butting stubborn heads and hearts.
Will two bruised and battered souls become one in the healing light of love
and faith?
Should they go through with the annulment they think they want?

“You aren’t going anywhere, Adeline Blair. This is your home and you are my wife, for richer, for poorer, for better or for worse…”
“I crossed my fingers on the obey part, so I shan’t do that.”…..

“You’re a coward, James Blair, and I’m ashamed to call you my husband. I’m going to the Reverend to ask about an annulment. I should’ve agreed when you wanted one a month ago.”

… “ Take this exciting journey with Adeline and James as they discover when God has a plan, love works in mysterious ways.”…

This is a sweet and clean Western romance short story.
Each installment is designed to be read in around two hours, so they're perfect for when you're waiting at appointments or have a few extra minutes to spare.

Each short story can be read as a stand alone but if you wish to read about the story of Amelia and Averill in order the first two books are available for just $0.99 or FREE on Kindle Unlimited.

'Strong-willed Bride for Her Lonely Farmer' is tagged as:

Similar books to 'Strong-willed Bride for Her Lonely Farmer'

More books like 'Strong-willed Bride for Her Lonely Farmer'   ❯

Buy 'Strong-willed Bride for Her Lonely Farmer' from the following stores: