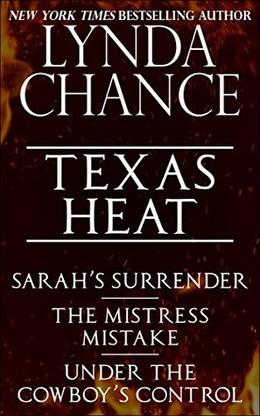 FOR A LIMITED TIME ONLY

Sarah's Surrender:
John Garrett is a cynical multi-millionaire who is rarely denied anything he wants, until the day he meets Sarah McAlister. Sarah's been hurt in the past and everything about the brooding rancher sends her defenses on high alert. She tries her best to stay out of his path, but his relentless pursuit makes him all but impossible to resist.

The Mistress Mistake:
Can love come from a sinful beginning?
Jessica Conway is at the end of her rope. She desperately needs a few things that her moral values can't buy: food, shelter, a chance for a better life.
Connor Montgomery is tortured with guilt from the past and wants only one thing from Jessica, something he's very willing to pay her for. Setting her up as his mistress seems like the perfect idea. But how long can a situation continue that was a mistake from the very beginning?

Under the Cowboy's Control:
Selena Taylor is an American citizen determined to find her grandparents after she loses her family to the violence of the drug cartel in Mexico. Crossing the border into Texas turns out to be the easy part.
Virtually penniless and enticingly innocent, she soon finds herself at the mercy of Travis Blake. Travis is a hard-working, self-made rancher who has never known love or softness of any kind. His only use for women is sexual, and Selena is caught on his ranch with no way out.
While Selena plots her escape from his control, Travis ruthlessly and methodically tightens his possession and makes it impossible for her to leave.
The struggle that follows is a clash of wills that pits purity against passion, virtue against vice and love against lust.
more
Bookmark Rate Book
Amazon Other stores