The Brigadier's Runaway Bride (The Dukes of War #5) 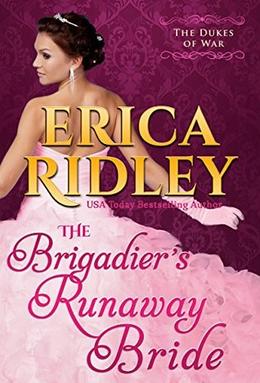 Miss Sarah Fairfax is having a wretched year. Her intended perished at war. His child is in her belly. To secure her future, she resigns herself to a loveless marriage. Just as she’s about to say I do , her fiancée returns from the grave to crash the wedding... but he’s no longer the charming, carefree man she remembers.

After being left for dead on the battlefield, Brigadier Edmund Blackpool is scarred inside and out. He fights his way home only to discover his intended before the altar with his best friend. He'll be the one to marry her, no matter what she wants! But when his new bride disappears with his child, he must reopen his wounds to win the most important battle of his life.

'The Brigadier's Runaway Bride' is tagged as:

The 'The Dukes of War' series

Buy 'The Brigadier's Runaway Bride' from the following stores: