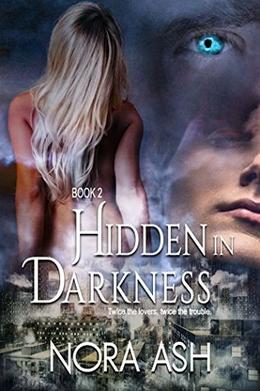 Hidden in Darkness (The Darkness Series #2)

Twice the lovers, twice the trouble

After unwittingly landing herself in the middle of a corrupt mayor’s sinister plans, curvy blogger Kathryn Smith finds herself claimed “for her own protection” by two of St. Anthony’s most powerful men.
Only problem? They hate each other with a vengeance, and Kathryn is suddenly stuck in the middle of their strife. A strife that involves violent fights, powerful magic—and now her.
Oh, and the “being claimed” part? Turns out, both men expect an awful lot more than a polite “thank you” in return for their protection.
With malevolent forces stirring up the city, Kathryn’s only choice is to delve deeper into its corrupt center in an attempt to save herself.

Neither The Shade nor Lightning ever planned on claiming a human of their own, and certainly never sharing one.
With St. Anthony at the brink of war, they cannot afford distractions - and especially not distractions that stir up emotions neither even knew existed.
But the deliciously curvy woman who keeps stumbling over trouble at each turn is too tempting to resist, and soon both must decide if she is more important than the city they are trying to save.

The 'The Darkness Series' series

Similar books to 'Hidden in Darkness'

Buy 'Hidden in Darkness' from the following stores: