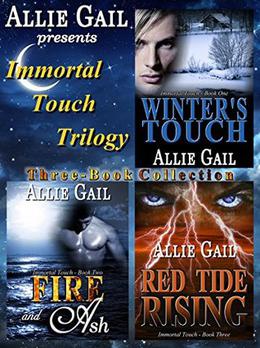 All three books in the Immortal Touch trilogy are now available in one convenient omnibus collection!
Winter's Touch:
Second-year college student Evangeline Spencer has learned over the years how to cope with the disturbing dreams that have plagued her since childhood. But now, fifteen years after his startling revelation, the nightmare from next door has returned to claim her.

Swept away to a remote location in Oregon, Eva has become the possession of someone incapable of compassion or remorse. Julian Winter is a vampire with the face of an angel, a ruthless killer whose sole intent is to staunch his craving for her blood. And to survive, she'll have to search the remotest depths of his soul for any remnants of humanity. Can she make his resurrected heart feel again?

Or will the crux of her life be slowly consumed?

Fire and Ash:
To the humans employed at his beachfront resort, Florida real estate developer Asher Reid is known as a narcissistic womanizer and temperamental control freak. To the secret, select group of immortals, he is the irrefutable enforcer of vampire law. Yet hidden beneath the charismatic façade lie the alpha's true obsessions - adrenaline highs, nightshade and an enduring lust for depravity.

Running from a faithless ex-fiancé who won't stop stalking her, Samara Porter hopes to find refuge working within the posh resort. But her tropical paradise houses an even bigger threat when she becomes the prime target for Asher's unwholesome games. Seduced by his deviant desires, Sami quickly finds herself caught up in a world where pain and pleasure coexist, testing the boundaries of how far she is willing to go to learn his corrupt secrets. And with her final test of loyalty comes a dark ultimatum - to kill for him...or face his lethal wrath.

Are you ready to go someplace dark?

Red Tide Rising:
What good is immortality when every moment is agony?

The vampire Ash has returned from his watery grave, proving that death is merely a minor inconvenience. Picking up where he left off? That might not be as easy. Because someone else is vying for Sami's heart - the last person he ever would have expected.

Fulfilling her desire for immortality seems the surest route to winning her favor. But for Sami, this gift will come at a terrible price. One simple lie of omission is all it takes to send her spiraling into a terminal state of madness. And as the last remnants of her sanity slip away, Ash can no longer deny that her maniacal behavior is putting them all at risk. His perfect angel has become a perfect liability.

But can he find it in his heart to destroy her?

All books by Allie Gail  ❯