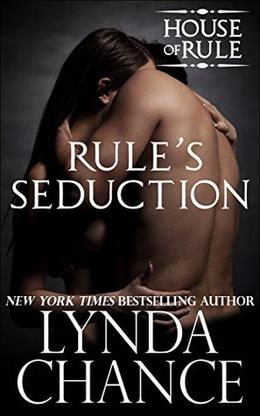 Rule's Seduction (The House of Rule #4)

Rule's Seduction:
When Max Villarreal finds out about the existence of Erin Rule, he realizes she could be the means for the perfect retaliation against the Rule Corporation. When he meets her for the first time, he immediately wants her for himself. Revenge and relief. Who knew it would be as easy as taking candy from a baby?
Excerpt: Preparing to fix what she’d screwed up, Erin opened the bathroom door of the private jet and took a few steps forward with the sheet still wrapped around her like a sarong. She gasped and stopped in her tracks when she came face to face with . . . her husband?
She sucked in a breath as her feet came to a stumbling halt. As she felt color flush her cheeks, she noticed that he didn’t smile but only raised a single, mocking eyebrow. His gaze pierced hers, sending her stomach to her feet in a mess of stupid feminine weakness. Then his eyes trailed down her body, stopping at her breasts and thighs, before sweeping down to her bare ankles and feet before slowly moving back up again.
Erin’s heart rate kicked up to a vicious degree, and as Max took one step forward, for the life of her she couldn’t stop herself from taking one step back.
He obviously noticed and thankfully, he immediately stopped. His lips twisted diabolically as he drawled slowly, “You look beautiful, sweetness.”
Her pulse accelerated alarmingly with both the compliment and the endearment. Oh, yeah. It was damn well obvious why she’d waltzed into that freaking wedding chapel with him. Even now, with her composure under attack, hating herself for what she’d done the night before, he still made her knees weak. Could her emotions be any more screwed-up? She wanted to scream at him; she wanted to throw herself in his arms and hope he kissed her senseless once again. But she did neither of those things—she was too confused to do anything but stand on her own two feet while she kept her mouth clamped tightly closed.
He prowled another step closer and then another, and with each step he took she scooted backwards until her spine was flush against the built-in bureau. The magic of his touch was blaring in her memory—it wouldn’t help her case in the slightest if she were to feel it now, when she desperately needed to retain what little brainpower she had left.
He was dressed for the new day in a crisp suit that screamed Savile Row, and he came so close that she was forced to lift her face to maintain eye contact. When she did, he put a single finger under her chin and lifted it further, jarring her nerves alarmingly. “You are fucking gorgeous—and undoubtedly the best coup I’ve pulled off in my lifetime.”
more
Bookmark Rate Book
Amazon Other stores

The 'The House of Rule' series