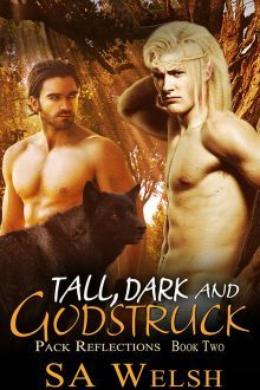 Logan is a wolf with a past. His mother is a witch, an evil one that tried to murder his friends and tear his pack apart. He volunteered for the small group tasked with stopping her and was faced with a difficult decision. He chose to step in front of his friend and take the deadly spell meant for Kyle. It killed him.
At least that's what he thought until he was once again put in the position to choose in a dream. This time, by a deity who offered him a chance to move on or come back. It is that melodic voice that tempts him back with the promise that he would be loved.
Needless to say the news that it wasn’t a dream and he now belongs to a Goddess isn't a nice surprise in the cold light of day and he rebels against the ownership. His friends rally round him and summon the deity to demand answers. Except…when Cerridwen appears, she isn't a Goddess anymore but a God. With white hair that glitters with magic, mesmerizing eyes and a body made for sin that makes his wolf pant.
It isn't a short or easy road, but Logan gives Cerrid the chance the man asks for and discovers being claimed by someone may not be that bad a thing, because sometimes the belonging goes both ways.
more
Amazon Other stores
Bookmark  Rate:

'Tall, Dark and Godstruck' is tagged as:

Buy 'Tall, Dark and Godstruck' from the following stores: