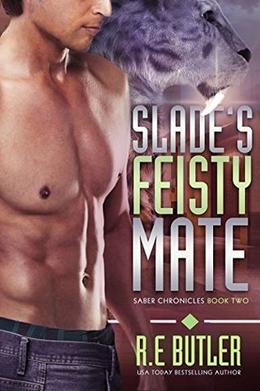 Slade Carmichael, second oldest were-saber toothed tiger, is happy his brother Alaric found his mate. He can’t wait to begin mate-dreaming about his own mate and get started on the next chapter of his life.

She-wolf Gretchen Havers is thrilled her best friend, Aubrey, found her mate at the were-fights and is happy to help Aubrey’s new family get settled in the supernatural hotel where she works. It is just a typical night, until a sexy guy walks in the front door, locks eyes with her, and promptly passes out.

She never expected her mate to purr, but she’s thrilled she’s found her truemate. She’s always thought of wolves as being the most awesome shifters because of their hunting skills and beautiful fur coats, but she’s beginning to think that tigers are pretty awesome too. Especially her truemate, who thinks she smells like butterscotch and likes how feisty she is.

'Slade's Feisty Mate' is tagged as: