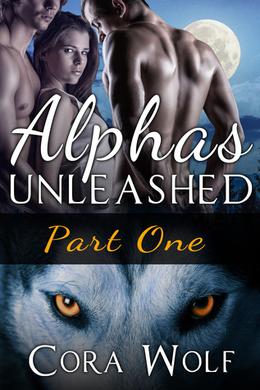 Ignore your urges and desires. Trust no one, especially other werewolves. Flee from the vampires that hunt you. And when the full moon forces you to turn you hide… and survive. This is how werewolf Sara Cole lives, and how she becomes cornered by two vampires, looking for another rare and valuable werewolf pelt to sell to the highest bidder.

But alpha werewolves Connor and Marcus have been craving a female werewolf for years, and they’re not about to let a couple of vampires take what they desire. They’ve rediscovered the lost ability to turn at will, and they no longer fear the vampires that hunt them. Now they are the hunters.

Connor isn’t shy about his lust for Sara’s curvy figure, and Sara is intoxicated by the scent of Connor’s strong, dominant wolf, even as she battles her deep-rooted mistrust of her own kind. Marcus, rich and reserved, doesn’t seem interested. But he is only biding his time, waiting for Sara’s mating heat to begin. He’s older, more experienced, and knows that he doesn’t have to chase Sara. She will come to him.
more
Amazon Other stores
Bookmark  Rate:

'Alphas Unleashed: Part One' is tagged as:

All books by Cora Wolf  ❯

Buy 'Alphas Unleashed: Part One' from the following stores: