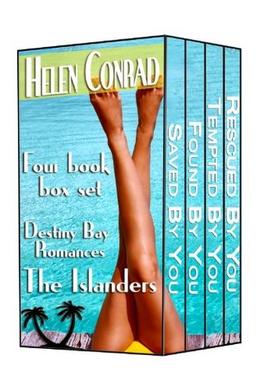 The four books of The Islanders cover the tropical branch of the wealthy and powerful Carringtons of Destiny Bay. A Bad Boy comes home to protect the girl he always loved but could never have. A lover from the past returns to find his original visit resulted in creating something he had never imagined. A playboy learns to babysit and a ditzy blond runs away from her wedding and right into Max Carrington's reluctant arms.

Sometimes it does pay to go home again.
# # #
Helen Conrad is an award-winning, bestselling author of more than 90 romances (over 15 million copies sold) published under various pseudonyms with Harlequin, Silhouette, Loveswept, and others.  She is currently revamping and rewriting much of her backlist--some available in the US for the first time--to present on Kindle.

(Excerpt Book 1)
Emotions were usually pretty deep with him. He didn't like to let them get too near the surface. But for just a moment, he'd stopped and turned slowly, taking it all in, remembering a past that could never be again, missing it, missing home and actually feeling a slight stinging in his eyes.
And that was when she got him.
"Okay, you bastard, hold it right there. Don't make a move."
At the same moment the voice hit him, both barrels of a shotgun were jammed very hard and very painfully into the small of his back, and he groaned in disbelief. He hadn't even heard her coming up behind him. He shook his head. He was losing it.
"I'd like to blast a hole right through you. How would you like that, you slime ball?"
"Hey, hold on just a minute..."
The barrel jabbed him. "Don't try to talk, dirt bag. Just start walking. I'm going to walk you right off my land, and then I'm going to call the cops. And the next time you come slinking around I'm going to blow your brains out. You got that?" She jabbed him again to get him going toward the road. "And you can tell Bart Carlson I'll do the same for any other of his pathetic flunkies that he sends over here to screw up my life."
It took only one quick twist and a little leverage, and he had her on the ground, his big body holding hers down, the shotgun wrenched from her grasp and sent spinning in the dust.
But that didn't mean she gave up. Not by any means. She fought like a wildcat, spitting and scratching at him with fury. It took both his hands to hold down hers, and the full length of his body to hold her captive.
"Cut it out, Annie," he growled at her, annoyed that she wasn't giving up even once she'd realized his superior strength. "I'm not going to hurt you."
The sound of her name was what seemed to still her for a moment. She stared up at him and he stared down at her, wondering if she had any idea that they had known each other before.
She'd changed. But her hair was still blond, still a mass of shimmering tangles that seemed to go on forever. Her body was still slim and lithe, but there was a strength to her he wouldn't have thought she would ever possess. She was still squirming beneath him, but it was beginning to feel good. He glanced at her cotton blouse, all askew and revealing the soft curve of her breast and a tiny strip of lace.
"Don't," she spat at him fiercely.
He looked up. Her face was older, naturally. The crystal blue eyes he remembered so vividly were wary, haunted by pain and struggle she couldn't have dreamed of in her younger days. And she wasn't laughing. In his memories, she was always laughing.
There was no sign of recognition. Didn't anybody remember him? Had he been erased from the minds of an entire community?
more
Amazon Other stores
Bookmark  Rate:

All books by Helen Conrad  ❯