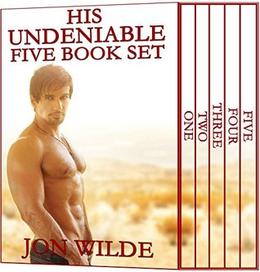 ******Save 40% off the cover price by buying this set********
This set features five Gay Romance books including:
His Undeniable Allure
After a hunky tourist breaks his heart, Provincetown native Kyle Thompson vows to never fall for an outsider again. Unfortunately, Kyle finds it hard to rebound and find a local boyfriend in a town full of tourists.
Then he meets a handsome new man with a past named Benjamin Warner. Is Benjamin just the man Kyle has been looking for, or is another broken heart closer than he realizes?
His Undeniable Chance
Adam Webster has been fraught insecurity ever since his father kicked him out of the house for being gay. Adam has since moved to Palm Springs to start a new life. Unfortunately, things haven't worked out the way he planned.
After a recent break up, Adam finds himself caught in the terrible position of having to wait tables at the same restaurant as his ex-boyfriend. Adam knows he has to do something to turn his luck around.
Then Adam meets a hunky stranger who tells him about a new job opening. Is this the path to happiness Adam has been looking for, or will this new hunk only lead to more heartbreak?
His Undeniable Temptation: Mark's Story
Mark Johnson is going through serious culture shock. He's a small town guy who has just made a big move to New York City. There's a lot to take in. The biggest adjustment of all though is being caught in the middle of a love triangle.
Back home, it was a rarity for Mark to have one man interested in him. Now two hunky men are hot for him. The question is, which will he choose--the smoldering with passion singer/songwriter, or the studly a capella singer with a heart of gold?
His Undeniable Temptation: Adam's Story
Adam Johnson wants nothing more than to move to the New York City, but his mother is training him to take over the family restaurant. When Adam falls for a hunky local who is bound for art school in the city however, Adam is forced to make the toughest choice of his life.
His Undeniable Gaze
After an awful break up, Robert Fowler's love life is in tatters. As time goes by, he wonders if he'll ever be able to pick up the pieces. When a hunky new man comes into Robert's life however, he starts to believe maybe his luck is finally turning around. But this new man has had his own share of heartbreak. Will the ghosts of the past prevent the new couple from having a happy future?
more
Amazon Other stores
Bookmark  Rate:

'His Undeniable Five Book Set: Part Two' is tagged as:

All books by Jon Wilde  ❯