Dance For You: Act 1: (An interracial romance) 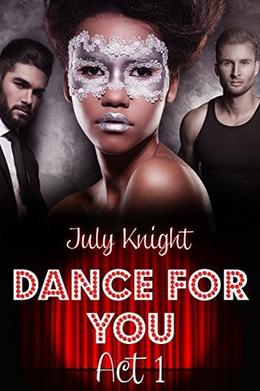 Meet Delilah--the caramel-skinned, curvy, wide-eyed beauty from Virginia Beach. With a laser-like focus on her grandiose dreams of making it big as a dancer, where else was she to go but the Big Apple--New York City? So armed with a heart full of determination and a bank account not-so-full of money, off she went ... New York, New York--the city so nice, they named it twice. And then a year passes ...

Not having gotten her "big break" after a year of training, auditions ... and more training & auditions, Delilah's money was running low. The dream seemed to be drifting further into the distance, further out of reach. Plus, damn it, RENT WAS DUE!!! Income had to start coming in or the pretty little dancer would have no choice but to crawl back to mommy and daddy in Virginia, and this would crush her.

As is common when money-desperation rears its ugly head, someone will come along and present you with what you may not have considered such a good idea if you weren't looking at the world through rent-is-due-colored lenses.

Enter, Chloe--an old friend with a solution to Delilah's money woes. Chloe had been dancing at Dolce Deluxe, an upscale burlesque club, and she thought that Delilah and her above-average dance skills would be a perfect fit. Reluctant at first, Delilah realized that this could be the answer to her financial problems, so she auditioned and got the job as the newest dancer at the opulent Dolce Deluxe.

Thus began Delilah's new, other-level, carnal, emotional roller-coaster chapter of her life, for which she was ill-prepared.

In Dance for You: Act I--the first installment of a sexy, steamy, thrilling trilogy--we follow Delilah and the rest of the intriguing cast of characters as they maneuver through the ups & downs, the ins & outs of a world at which most of us rarely get even the tiniest peek.

Of course, a girl with the body and face of Delilah is sure to catch the attention of more than one man, especially in an environment like Dolce Deluxe. One such man is the sexy, intimidating, bearded, olive-complexioned owner of the club, Santino. He wants Delilah and is not used to taking "no" for an answer.

Oh yeah: let us not forget about the drug-running, the missing girls, the sex trafficking, and a cliffhanger that will leave you aching for more.

If you're in the mood for a sensual read which compels you to read more and more--page after page--then Dance for You: Act I is for you.

'Dance For You: Act 1: (An interracial romance)' is tagged as:

Similar books to 'Dance For You: Act 1: (An interracial romance)'

More books like 'Dance For You: Act 1: (An interracial romance)'   ❯

Buy 'Dance For You: Act 1: (An interracial romance)' from the following stores: