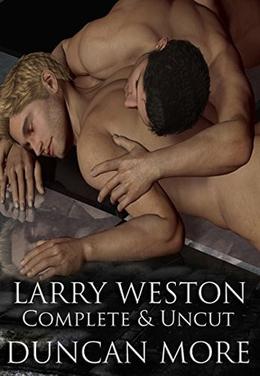 “Complete and Uncut.” That was exactly how Larry liked the men he bedded. Making his way in the world, he is hired at an Italian restaurant where the waiters are as spicy as the cuisine. A sexy boss with an unquenchable desire for his waiters, as well as a regular customer always in the company of young men and looking for more, Larry’s job takes some interesting turns, and ultimately leads him to a place he never thought he would be.

Excerpt:
“You’ve sort of taken him under your wing, eh? Just like a robin watching her young take their first flight.”

“Sort of. I think he has the potential to be really good at this, and I want to make sure his first solo is successful.”

He found Larry standing at the waiter’s station waiting for his first order to be fixed. “How’s it going so far?”

“Pretty good. Except I think he was trying to hit on me.”

“You don’t have to think about it. He was. He likes his men young, and you’re his type.”

They approached the table, and Larry was flawless in his introductory service. He had the beverages to them promptly, took their table order, and keyed in the data for the kitchen. He returned with Mr. Boggs’ food containers, processed the credit card, and was shocked to find a twenty dollar bill stuck in his hand as Mr. Boggs rose from the table. “Good service, young man. I’ll see you again.”

The rest of the night went rather smoothly.

“I’m being picked up. Now look, there’s one thing I have to tell you about Mr. Trathan. How much did you make in tips tonight?”

“That’s good for a slow Monday. On a weekend, you’ll probably grab at least two bills per night. Once you get used to making that kind of money, Mr. Trathan will ask you to come in early one afternoon and he’s going to ask you if you want to keep your job? That’s when he’ll put the moves on you. If you comply, you keep your job. If you don’t, you’re history.”

“Because he did that with me.”

“I see. Thanks for the heads up. But that’s no problem. I like sex with guys, especially if they’re uncut.”

“So do I now. I was straight as an arrow back then, but because of Mr. Trathan…oh, here comes the car. Let me introduce you to Lance. He’s my husband of two years.”
more
Amazon Other stores
Bookmark  Rate:

'Larry Weston: Complete and Uncut' is tagged as:

Buy 'Larry Weston: Complete and Uncut' from the following stores: