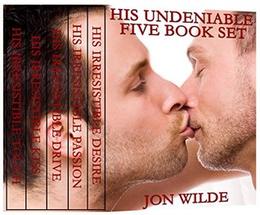 ******Save 40% off the cover price by buying this set********
This set features five Gay Romance books including:
His Irresistible Desire
After suffering a crushing upset, thirty year old MMA fighter Colin Robinson fears that it might be time to throw in the towel on his career.
Out of the blue, he gets an amazing offer for another fight--but it comes with a catch.
Before Colin can focus on another bout however, he needs to piece back together the shambles of his love life. After having his heart broken recently, that won't be easy.
Then Colin meets a handsome stranger named Jake King who has a past. Will Jake change his life for the better, or worse?
His Irresistible Touch
Two years after a crushing break up, Sebastian Chase has finally found a hunky man who loves, honors, and cherishes him. When his ex-boyfriend comes back into town looking as sexy as ever with his his sights on winning Sebastian back however, all bets are off.
Suddenly Sebastian is caught between two men, forcing him to make the hardest decision of his life. The question then becomes who will he choose?
His Irresistible Drive
Trevor Maxwell has two big dreams in his life. One is to play basketball for Carolina University. The second is to find Mr. Right. For a while it seems like he'll get to do both.
He is deeply in love with his high school sweetheart Connor Samson and spots the coach of the Carolina University basketball team doing recruiting at one of his games.
Then Trevor's life is turned upside down. First Connor breaks his heart, then Carolina University passes on recruiting him to play college basketball.
Now Trevor is left picking up the pieces. Will he be able to find redemption, both in love and on the basketball court?
His Irresistible Kiss
Scott Jameson thought he had life all figured out. He was in love and was on track to get a big promotion. Then everything came crashing down. Ever since then, he's been trying to pick up the pieces.
When a new hunk takes interest in him however, will Scott be able to give his heart away again, or will the wounds of his past stand in the way of his future?
His Irresistible Passion
Surly starlets, hot-headed hunks, and demanding divas. That isn't a page ripped from the tabloids, rather just another day in Al Walters life as a server in the world famous Hollywood Hills Hotel. During award weekend however, the misbehavior reaches a fever pitch.
Al is done with the drama. He's tired of waiting on celebrities hand and foot. He has dreams of his own that he's been hoping to fulfill with his hunky boyfriend.
Al then comes up with a plan to get out of his hotel employment purgatory. If things go according to his plan, his life will be changed forever. If not, he'll be in for one hell of a weekend.
more
Amazon Other stores
Bookmark  Rate:

'His Undeniable Five Book Set' is tagged as:

All books by Jon Wilde  ❯

Buy 'His Undeniable Five Book Set' from the following stores: