Rough And Tender (Quest For The West #1) 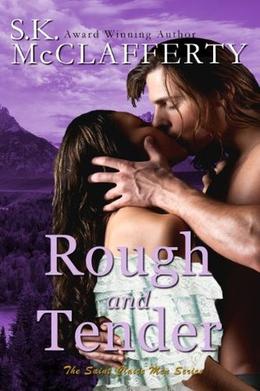 Rough and Tender, the first book in The St. Claire Men Series was awarded the Best First Western Historical Romance Award from Romantic Times Magazine in 1992. Funny and heart-warming, this tale of Beauty winding the ultimate Alpha Male around her little finger remains a classic among fans of Historical Romance.

When adventurer Eben St. Claire’s horse is lamed in an accident, he is forced to seek refuge for the night in the isolated trading post where Henri Delacour lay dying. In a simple act of kindness, Eben helps the old man, who has fallen, back to his bed and brings him water. Henri repays the kindness by luring Eben into striking a bargain that he will soon have cause to regret. . . a devil’s deal that will destroy his plans and alter the course of his life, even while it fattens his coffers.

Henri has offered to pay Eben a thousand dollars in gold to escort his sweet and dutiful daughter to the East and see her settled, and since Eben is already headed in that direction, it surely can’t be that bad. Yet, once the bargain is sealed, Eben discovers that Raven Delacour is a fully grown backwoods hellcat ready to try the limits of his patience and Eben is in a quandary. His promise to a dying man can’t be taken lightly… yet how does he keep his hands off the Frenchman’s beautiful daughter long enough to see her reintroduced to civilization?

'Rough And Tender' is tagged as:

The 'Quest For The West' series

Similar books to 'Rough And Tender'

All books by Selina MacPherson  ❯

Buy 'Rough And Tender' from the following stores: