by Laurie A. Green 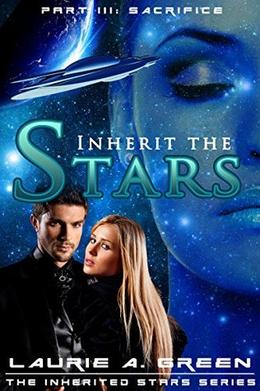 As the truth behind Sair's place in the galaxy and Drea's unique existence are revealed, it becomes clear that they are vital to the success of the coup. But their part in ending the Ithian Alliance may come at a terrible price for Sair: the loss of the remarkable woman he has fallen in love with—and their chance to inherit the stars.

ABOUT THE INHERITED STARS SCIENCE FICTION ROMANCE SERIES:
The year is 3500 AD—more or less. No one really keeps track anymore. Since the fall of peacekeeper planet, LaGuardia, two centuries before, much has been lost. Few remember that LaGuardia was once known as Draxis. Fewer still have knowledge that Draxis once guarded a spatial vortex—a crossrip in time and space—and passageway to a legendary world called Earth where the human species originated. Somewhere, hidden in a forgotten archive, is the written history of the known universe and the chronicles of the men and women who helped forge a future in the stars.

'Inherit the Stars Part 3: Sacrifice' is tagged as:

The 'The Inherited Stars' series

Recent books by Laurie A. Green

Buy 'Inherit the Stars Part 3: Sacrifice' from the following stores: