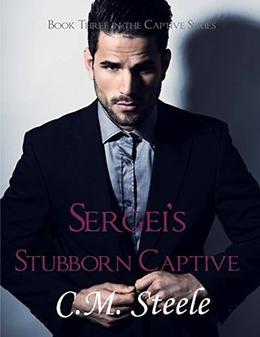 Claudio Santini had been wreaking havoc on all those who crossed his path. When he disappeared no one asked questions. That was until a rookie detective named Lana Grey waltzed into town looking into his whereabouts.

Starting with his rivals, the Rossi and Rykov Families, she was certain they had something to do with his absence. Her superiors forced her to back off, but she only changed her tactics. Lana went after Nikolai Rykov’s right hand man, Sergei Antonov.

Sergei was immediately intrigued by the beautiful pain in the ass. The biggest issue he had with Miss Grey was her persistence in the search for Santini. After one too many encounters with the nosy woman, he took matters into his own hands. She became Sergei’s stubborn captive.
more
Amazon Other stores
Bookmark  Rate:

'Sergei's Stubborn Captive' is tagged as:

All books by C.M. Steele  ❯