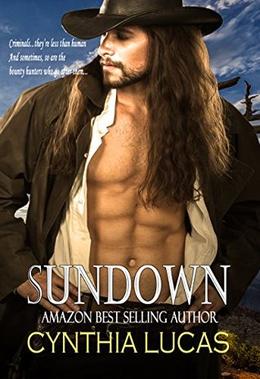 Holden Jenkins had been born under unusual circumstances...and in fact nothing about his life was very 'usual' from that day forward. Half human...and half vampire, he'd taken the nickname 'Sundown', given to him by his adopted grandmother when she realized that he seemed to thrive when the sun set and he loved to stay awake all night.

He'd been conceived shortly after his father had been bitten...before he'd known what was happening to him and had fully changed. His birth had killed his human mother, something that he'd never been able to forgive himself for, and because of which he'd vowed to hunt down and destroy as many of his own kind as possible. He'd been raised by the old Cherokee woman who had delivered him...and who'd taught him to control his animal instincts, and his thirst for blood. Under her care and guidance, he'd learned to harness his strength and elevated perceptions that would later come in handy when he'd decided to become a bounty hunter.


His life had been simple....sleep in the day, hunt at night and go where the money is. That is until he'd met and rescued a young boy who was being held hostage by Elias Jacobson, a wanted criminal who had brutally murdered the boy's parents.


Sundown decides to take the youngster with him to find an adoptive family in the closest nearby town. It's there that he meets Miss Jolene...the madam running a whorehouse, who isn't what she seems to be, and her beautiful auburn haired niece, Clover whose icy blue eyes and sweet kiss makes him begin to wonder if love is possible for a bounty hunter with no place to call home and secrets that none could ever know.


When Clover is kidnapped by Elias's brother Vernon, a vampire with vengeance on his mind and blood lust in his eyes, Sundown knows that he'll stop at nothing to bring her back safe and sound.

'Sundown' is tagged as:

All books by Cynthia Lucas  ❯

Buy 'Sundown' from the following stores: